What’s The Best Crossbow Scope For Your Budget?

What is a crossbow scope?

Crossbows have dramatically improved in their technologies over the past decade or so and now offer some of the highest power and best accuracy in the archery world. At one time, it used to be that in most states it was only legal to hunt with a crossbow if a hunter was handicapped. This has changed now in most states and crossbow hunting is surging in popularity. As the popularity increases, so do the technological advancements.

A quality crossbow is capable of putting 3 arrows in a 1” group at up to 40 or more yards, but only with the proper optics to fully take advantage of this accuracy. Just as in rifle shooting, the optics for a crossbow need to have crisp lenses, hold a solid zero and be able to be adjusted to pinpoint accuracy to really offer the shooter the best experience possible. Below, we discuss the different types of crossbow scopes and also offer recommendations based on our field staff’s testing, and through interviews with our readers who have shot each of the scopes.

What are the different types of crossbow scopes?

Crossbow scopes can be broken into four main categories: fixed power with or without an illuminated reticle, variable power (which is actually variable speed, more on that later) and red dot scopes. Below we will discuss each type of crossbow scope in more detail and also discuss the most important features of each.

What is a fixed power multi reticle scope?

When talking about a multi reticle scope, this is where there will be multiple graduations in the scope to account for the different aim points as the distance increases. Typically, you will sight your scope in at 20 to 30 yards, then move to the next crosshair below center which is generally designed to be zeroed at 10 yards further away. Because all crossbows shoot at different speeds, you will need to practice to know where that next aim point actually hits, as well as the one below it, and the next as well.

These multiple aim points (multi reticles) allow you to have an aim point for varying yardages allowing for more accurate shots.

What is the best fixed power multi reticle scope?

The Nikon Bolt XR Crossbow Scope delivers super crisp optics in a waterproof and fogproof platform. The scope features a 3x magnification with a 32 mm aperture offering some absolutely incredible light transmission. The light gathering is so good we really wish this had an illuminated reticle, but then it wouldn’t be in this category! There are a total of 5 aim points in the reticle, which are designed for 10 yards apart, although you will need to test this with your specific crossbow/arrow configuration as the variance in speed can make a big difference in the actual aim point. It is important to note that in some advertising we have seen this called a 3 – 32x X 32 mm scope, making it appear it is a variable power. It is NOT a variable power…we think this is just a misprint in advertising that has not be caught yet. 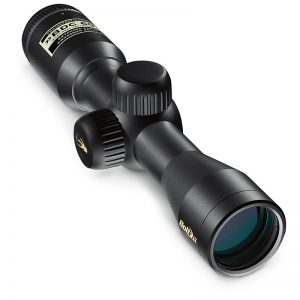 What is a fixed power multi reticle illuminated scope?

This category of scope is just like the above category only with the addition of illumination to the crosshairs. This illumination can be very useful in very low light conditions, as the scope might offer you enough light gathering to see your prey, but you might not be able to see the black crosshairs against a dark background. The illumination is typically red and/or green to preserve night vision, and is usually in the form of a dial on the side of the scope that allows you to adjust the intensity of the light to fit the external conditions.

What is the best fixed power multi reticle illuminated scope?

The UTG 4 x 32 Crossbow Scope offers a lot of features for a reasonably priced package. The scope features a 5 step RGB reticle that allows for multiple aim points. As with any scope with multiple aim points, you will need to see exactly where this scope hits based on your specific crossbow/arrow speed combination. We found the optics to be very clear, especially for a scope in a more value price range. The illumination is variable in intensity and does a great job of lighting up the crosshairs for low light shooting. We were a little concerned about the lever locking rings that come with this scope, but after a LOT of arrows downrange, we never saw anything that showed any movement or loss of zero. All in all, this is a quality scope for a good price that will really get the job done. 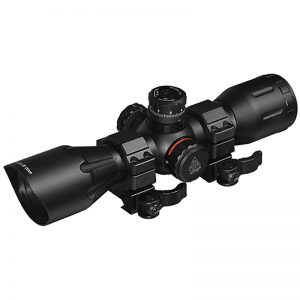 What is a multi-speed adjustable illuminated scope?

In most cases with optics, when you see a variable power (as in 2x – 5x X 32) you are going to expect the power of the scope to be variable, with the user being able to zoom the scope while it holds zero. While the variable power in a crossbow scope does result in a certain amount of zoom, that is not what the intention is of the variable power. The power adjustment is actually designed to change the aim points for the scope to match the drop of the arrow based on the speed of your specific crossbow/arrow combination. That is to say, if you are shooting a crossbow at 325 fps, the drop is going to be drastically different than on a crossbow being shot at 390 fps. The variable zoom of the scope actually changes the aim points for each reticle allowing you to match your aim points for your exact configuration. A little on the long side to explain, but it will make perfect sense once you begin playing with the settings on the scope.

What is the best multi-speed adjustable illuminated scope?

The Excalibur Tact-Zone Illuminated 2.5 – 6 X 32 Scope is the perfect scope for those shooters who want to have pin point accuracy from every reticle, and don’t want to have to adjust their shots because of the speed of their crossbow. Offering adjustments for crossbows shooting from 275 fps all the way up to a blistering 410 fps, the Tact-Zone will allow you to put the crosshairs dead center at 20 yards all the way out to 60 yards. Although there is a zoom on the scope, the zoom is designed to allow you to match your reticles with the speed of your crossbow to allow for a perfect customization. The optics are very crisp and the scope does a great job of holding zero. Keep in mind you will need to order scope rings separately. Being both waterproof and fogproof, this could just be the perfect scope for you. 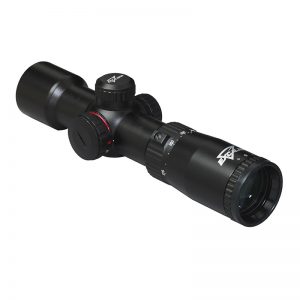 What is a red dot scope?

A red dot scope is a scope that uses a projected red dot to create a shooting point. Please note this is not a laser sight and this does not project a red dot out onto your target, but rather it is projected inside the scope where only the shooter can see it. These scopes do not offer any magnification and are typically designed to be shot with both eyes open. This allows for a much quicker target acquisition than through a traditional magnified scope and is by far the best choice if you need to make rapid shots. The red dot scope can have up to three dots in the reticle to allow for calibration to a variety of shooting distances. These scopes only work when turned on, so always be sure to have an extra battery as there is nothing in the scope in terms of an aim point when the power is off or the battery is dead.

What is the best red dot scope?

The Truglo Red-Dot Crossbow 3 Dot sight is a great choice for someone who is looking for the accuracy of a scope, but would rather not have magnification for their shooting, or are looking for a faster target acquisition. There are three dots that are projected within the scope allowing the shooter to have 3 separate aim points. It is important when sighting in with this scope to learn where the aim points are for the two lower dots as the impact point can be different for each crossbow, depending on speed. This scope does a good job of holding zero and offers a clear sight picture. The scope also comes with see through, flip up lens caps to protect the lenses in the field. All in all, this is a good scope at a good price point. 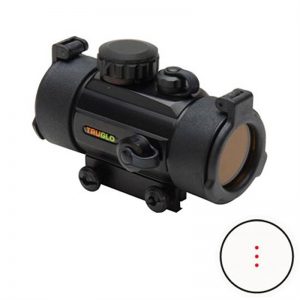 What accessories are available for crossbow scopes?

There are not a lot of accessories that are available for crossbow scopes as most come with mounting rings and those that do not usually have a specific size required to mount them, which is something you need to pay attention to when ordering. One accessory that can be very useful for shooters is a speed dial that allows you to customize your scope for the specific speed of your crossbow.

The HHA Speed Dial allows for the infinite customization of your crossbow’s scope based on the specific speed of your crossbow/arrow combination. Made from CNC machined aluminum, the mount attaches quickly to your scope rail with two bolts. The mount is designed to allow for crossbow speeds of 260 to 410 fps to be accurately adjusted for shooting ranges from 20 yards all the way out to 80 yards. This is done by using the included speed tape for your specific crossbow, as measured on a chronometer. You simply put the corresponding tape on the dial, zero the scope at 20 yards, then dial in the distance to automatically have the scope adjusted for elevation. This is a must have for those shooters who are looking for the top level of accuracy and performance from their optics. 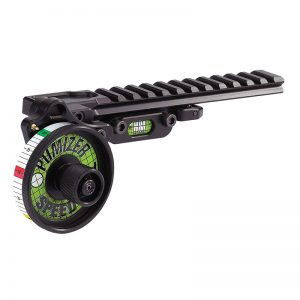 The Best Range Finders For Hunters