Hunting waterfowl can be a very difficult proposition, especially as the season progresses. Ducks have excellent eyesight and can be quite discerning as to where they are going to land to feed. The surest way of getting a flock to come in close enough for a shot is to utilize a good spread of decoys. The decoys offer an incoming flock a sense of visual security that no predators are nearby, otherwise why would those decoys be so calmly feeding?

There are different types of decoys as some will better attract ducks than others in certain conditions, and working multiple types in the same spread can lead to greater success. Below we will talk about the various different types of decoys and what makes them effective. Because we understand that it is often difficult to process the huge volumes of information out there on so many different products, we have tested many decoys and worked with our field staff to offer you the best in each category.

What is a floating decoy?

There are various ways to utilize the floating decoy, from a typical spread where each is anchored together to form a pattern, to individually weighting each decoy to even a jerk rig where the decoys can be moved together to simulate a flock swimming together and feeding. Floating decoys are typically made from a hard molded plastic and do not weigh much, but can be rather bulky as they are not designed to stack together in any particular fashion.

What is the best floating decoy?

The Dakota Decoy X-Treme Flocked Mallards provide an ultra realistic decoy spread, one of the best we have seen. These are not the least expensive decoys out there, but they are certainly worth the investment if you do not want to have to constantly replace your spread. The set of twelve decoys consists of 7 drakes and 5 hens. Each decoy goes through a multistep painting process to ensure realistic results. The drakes come with 4 different head styles and the hens with 2 head styles. With each head being able to be rotated a full 360 degrees, the possibilities are limitless as to how you can arrange your spread. The drakes also have flocked heads, adding another dimension to the realism. These decoys are slightly oversized (about 16” long) but do a great job of really bringing in the birds. One item to note, we have talked to a few of our field staff that have commented that the heads can be a bit difficult to put on, so be ready to follow the instructions to get them set up. 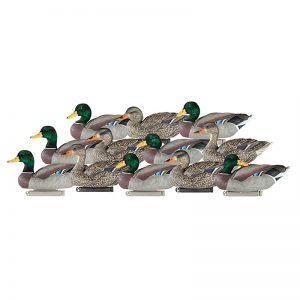 What is a butt up decoy?

A butt up decoy is basically a floating decoy that is designed to look like a feeding duck. For those that are new to duck hunting, when ducks feed in shallow water, they will put their tails sticking up out of the water as they root through the bottom for their dinner. This is a great sign for passing flocks of ducks that not only is there a viable food source, but also the area is safe enough for those ducks to be feeding in that position. Typically, a few butt up decoys can be added to a spread of floating decoys to further entice passing flocks to come in for a closer look. It would not be recommended to only have butt up decoys as that is not a realistic way that a flock of ducks would act on the water.

What is the best butt up decoy?

The Greenhead Gear Over-Size Duck Decoy Butt Up Feeders are an excellent addition to any spread. They are very stable in the water and also very realistic. They are very easy to set up and do a great job of diversifying your spread. They are a bit oversized, but are comparable to most decoys on the market in terms of size. These are marketed as a pair, with one butt up drake and one butt up hen. 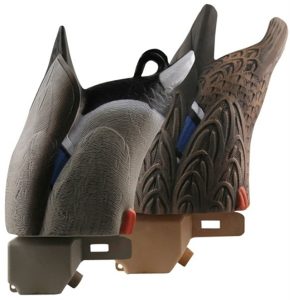 What is a motion decoy?

A motion decoy is a decoy that is typically mounted to a stake or other suitable stand to have it sit above the ground or water. A typical motion decoy will have wings that stick straight out to each side and are mounted on a central shaft that goes through the body of the decoy.

These decoys are designed to add motion to your spread to simulate a duck fluttering its wings as it comes in for a landing. When you first see one of these decoys, you will note that the wings are not made to be that realistic. The function of the wings is to rotate quickly to simulate a landing bird, rather than trying to look completely realistic. These are decoys that can be added to a spread of otherwise very realistic decoys to further entice birds to come in to investigate.

There are two basic types of motion decoys, those that run on batteries and those that must have a bit of wind to move the wings.

What is the best electric motion decoy?

The Mojo Outdoors Teal Duck Decoy is an excellent choice for those looking at a battery powered motion decoy. The decoy is powered by 4 AA batteries and can actually run up to 16 hours on a single set. One nice thing about this decoy is the motor is designed to turn the wings almost twice as fast as competing decoys, adding a lot more flash and movement to your spread. The overall decoy is a bit smaller than most mallards, but that makes it more portable while still providing movement. The wings are made from corrugated plastic and you can purchase replacements. We have seen where this unit might be shipped with only a single support pole which can leave you a little short if over water more than a foot deep or so. 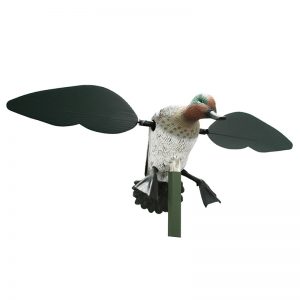 What is the best wind motion decoy?

The Edge Innovative Hunting Air Lucky Hunting Decoy is an excellent choice for adding movement to your spread without the worry of batteries or electric motors. The Edge Innovative Hunting decoy is designed for the low wind wings to spin with as little as a 5 mph breeze. The decoy is also designed to spin on the mounting pole where it is always facing into the wind, ensuring the wings are always turning as long as there is just the slightest of air movements. The support pole is easy to push in to soft ground, but be sure to rinse it out each time you are done as it is hollow and can trap mud in it. 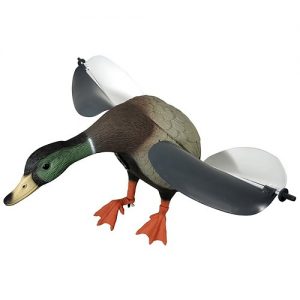 What is a swimming decoy?

A swimming decoy is essentially a decoy that floats on the surface that uses a small motor to push it around, essentially giving the appearance of a duck swimming on the surface. As the decoy swims along the surface, it gives off a “V” wake in the water which is visible from a long distance. This can certainly grab the attention of a passing flock of ducks and potentially alter their course as they come in for a closer look. Typically, a swimming decoy will be anchored to the bottom with a weight and will have a few feet of line to allow it to swim around a bit while not leaving the area of your spread.

What is the best swimming decoy?

The MOJO Outdoors Swimmer Mallard Duck Decoy is designed to create the distinctive “V” wake pattern to mimic ducks swimming on the surface of a pond or lake. It is designed to run for up to 8 hours on the included rechargeable 6 volt battery. The MOJO Swimmer uses a pump design that pulls water from just under the surface into its pump to provide propulsion. The paint scheme is quite realistic and it is constructed of heavy enough plastic that you should get many seasons’ use from it. It is recommended to add swivels to the anchor line to keep it from tangling up. 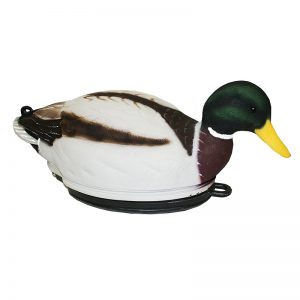 Just as with many other groups of products in the hunting industry, decoys can be made much more effective, easier to use and/or easier to transport when combined with the right accessories. Below we take a look at the most common accessories used with duck decoys, and offer a suggested “best of” item for each category based on our testing, our field staff and feedback from our readers.

Decoy bags are a must for transporting a spread of duck decoys. Whether using simple floating decoys, or more complex motion decoys, being able to carry a suitable number of decoys to create an effective spread really comes down to how you intend to organize them. There are two main categories of decoy bags, the slot bag and the mesh bag.

Slot bags are designed to separate the decoys with dividers to ensure they do not rub paint off of each other during transport. Most slot bags will have a drain system in the bottom of the bag, as does the DecoyPro we tested and recommend (link below). Slot bags typically are more expensive than their mesh counterparts, but are designed to offer a much higher level of protection for decoys. Slot bags will also often have organizer pockets for decoy line, swivels and rigs as well. 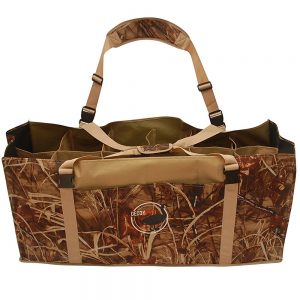 Mesh bags are the economical alternative to the more expensive slot bag. Typically a mesh bag is going to be a no frills mesh sack with some type of drawstring closure at the top. The DecoyPro that we recommend (link below) also offers shoulder straps to make carrying the bag a bit easier. These bags will typically fit only 6 – 8 decoys per bag and will not offer protection for the decoys in terms of rubbing the paint off each other during transport. 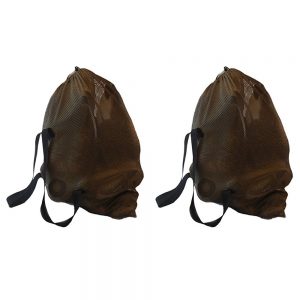 Decoy line is available in a variety of sizes to best fit your individual needs. It is often sold by weight in spools rather than in lengths, so the heavier you go to in terms of line strength, the less length you get on the spool. The most important features are typically abrasion resistance and flexibility to aid in knot tying. The link below is one of the better decoy lines we have tested. 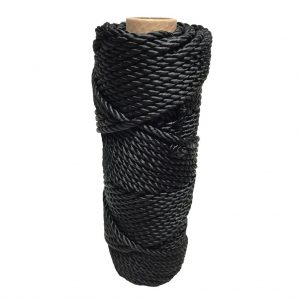 Wearing gloves when setting and retrieving decoy spreads can mean the difference between a cold and wet experience, and one where your hands stay dry and warm. Typically, decoy gloves are going to have a longer gauntlet to ensure water does not come inside the glove. It should go without saying that they need to be fully waterproof and not just water resistant, but we are going to say it anyway, just to make sure. Dexterity is not as important for setting and retrieving decoys, so that isn’t a major concern. The Mossy Oak gloves in the link below are the gloves that get our nod for value and quality.

Decoy anchors are necessary to ensure your spread stays in place and doesn’t drift out beyond your shooting range. Typically, anchors are fairly straight forward consisting of a heavy sinker attached to a cable or line that then attaches to the bottom of the decoy. We have found that steel typically holds up better than nylon line (assuming you are hunting fresh water) and makes it better to not have to replace as often, which is why the Lifetime Decoys get our nod in the link below. 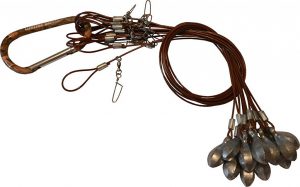 Jerk rigs are designed to create movement using standard floating decoys. This can be a cost effective alternative to a swimming decoy if you don’t mind doing the work rather than an electric motor. Typically, you will attach line to a given number of decoys, and then wind in the line to create “V” wakes in the water to simulate swimming ducks. If you opt for this type of rig our best recommendation can be found below. 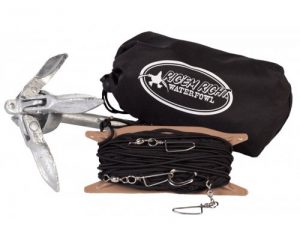 Best Deer Feeder For The Money